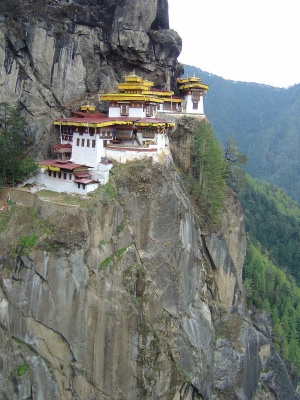 Taktshang (Tiger's Nest) is one of the most famous monasteries in Bhutan. Completed in 1692, it hangs on a cliff at 3,120 metres (10,200 feet), some 700 meters (2,300 feet) above the bottom of Paro valley, some 10 km from the district town of Paro. Famous visitors include Shabdrung Ngawang Namgyal in the 17th century and Milarepa. The name means "Tiger's nest", the legend being that Padmasambhava (Guru Rinpoche) flew there on the back of a tiger. The monastery includes seven temples which can all be visited. The monastery suffered several blazes and is a recent restoration. Climbing to the monastery is on foot or mule.

At 2,300 feet above the valley, it is the highest known temple in height above ground, see: List of Buddhist Records and Trivia.

Although, technically not "off the ground" since it rests on a mountain, the impressive image to the right showing it on the edge gives sort of an image of being off the ground (the valley) below. The actual record would be a temple or center in a high rise or other man-made structure, such as Vulture Peak Dhamma Center.