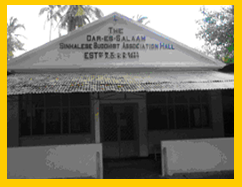 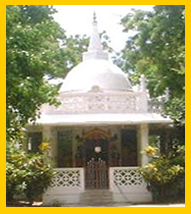 Tanzania - Buddhist Temple & Meditation Centre is the oldest Buddhist temple and meditation center in the entire continent of Africa.

In 20th century, in Africa especially in Tanzania, Sri Lankan people established Buddhist temple after they came to work in Dar es Salaam around 1915. This is the oldest Buddhist temple in Africa. They were about 400-450 people.

They worked together and formed “Singhalese Buddhist Association” and then asked for a piece of land from the government of Tanzania. They were given a piece of land from the government as donation at city center. They then brought a seedling of Bodhi tree (this was the tree under which the Buddha attained full enlightenment) from Sri Lanka and planted it in 1920.It has grown up now covering about quarter acre.

The Buddhist Association hall was built in 1927. In those days Tanzania was still under the British protectorate. The association was then registered under the societies in 1955.

Not only the Sri Lankan Buddhists who supported the building and maintenance of the Association hall, but also the Sri Lankan Muslims, Christians, and Hindus who worked in Tanganyika that time gave their support.

In the past, the association was called the “Sinhalese Buddhist Association”. But it did not include the Thai, Burmese, Chinese, African and other Buddhists hence it was then changed and named as “Buddhist Association” so that all Buddhists and others could come and practice together. This happened on 09th July 1968. Since then it is open to the public to come and do their practice. Even former president Mwalimu Julius K Nyerere also offered Dana (food) for monks in the temple.

The current abbot is Ven. Ilukpitiye Pannasekara, Chief Monk for the African continent and the twelfth resident monk to Tanzania. Currently he is residing at the centre and is working hard to establish Buddhism in Africa.