Temple of the Emerald Buddha 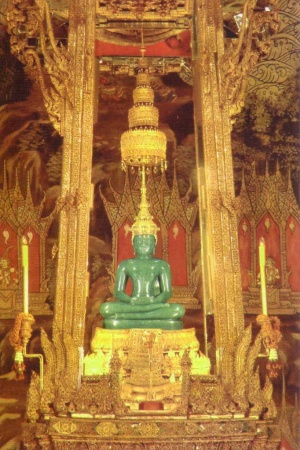 The Wat Phra Kaew (English Temple of the Emerald Buddha, Thai: วัดพระแก้ว; full official name Wat Phra Sri Rattana Satsadaram, Thai: วัดพระศรีรัตนศาสดาราม) is regarded as the most sacred Buddhist temple (wat) in Thailand. It is located in the historic center of Bangkok (district Phra Nakhon), within the grounds of the Grand Palace.

The construction of the temple started when King Buddha Yodfa Chulaloke (Rama I) moved the capital from Thonburi to Bangkok in 1785. Unlike other temples it does not contain living quarters for monks; rather, it has only the highly decorated holy buildings, statues, and pagodas.

The main building is the central ubosoth, which houses the Emerald Buddha. There are three main doors used to enter the temple, however only the King and Queen are allowed to enter through the center door. Even though it is small in size it is the most important icon for Thai people. Legends hold that the statue originated in India, but it first surfaced in the vassal Kingdom of Cambodia and was given as a gift to the King of Ayuttaya in the 15th century 1434. The image disappeared when Burmese raiders sacked Ayuttaya and the image was feared lost. A century later, the 'Emerald' Buddha reappeared in Chiang Saen, after a rainstorm washed away some of its plaster covering. It was then moved to Chiang Rai, then Chiang Mai, where it was removed by prince Setatiratt to Luang Prabang, when his father died and he ascended the throne of that Siamese vassal state. In later years it was moved to the Siamese vassal state of Vientiene. During a Haw invasion from the North, Luang Prabang requested Siam's help in repelling the invaders. The King of Vietienne tratoriously attacked the Siamese army from the rear, so the 'Emerald' Buddha returned to Siam when King Taksin fought with Laos and his general Chakri (the later King Rama I) took it from Vientiane, which at that time had been brought to its knees by the Thai Army. It was first taken to Thonburi and in 1784 it was moved to its current location. Wat Preah Keo, in Phnom Penh, is considered by many modern Cambodians as its rightful resting place, whereas, Haw Phra Kaew, in Vientiane, is considered by many Lao people as the Emerald Buddha's rightful place.

The wall surrounding the temple area – from the outside only a plain white wall – is painted with scenes from the Thai version of the Ramayana mythology, the Ramakian. Several statues in the temple area resemble figures from this story, most notably the giants (yak), five-meter high statues. Also originating from the Ramayana are the monkey kings and giants which surround the golden chedis.

The Temple also contains a model of Angkor Wat, added by King Nangklao (Rama III), as the Khmer empire of Cambodia and the Thais share cultural and religious roots.

Despite the hot weather most of the year in Bangkok, long trousers are required to enter the wat. This rule is strictly enforced. The facility offers the rental of proper trouser wear.