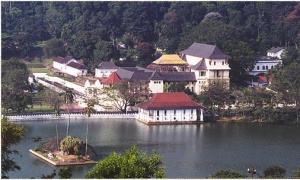 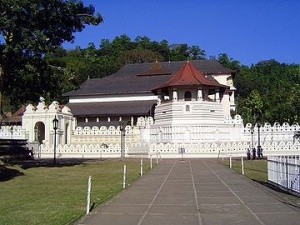 The Sri Dalada Maligawa or The Temple of the Sacred Tooth Relic is a temple in the city of Kandy in Sri Lanka. It was built within the royal palace complex which houses the only surviving relic of Buddha, a tooth, which is venerated by Buddhists. The relic has played an important role in the local politics since ancient times, it's believed that whoever holds the relic holds the governance of the country, which caused the ancient kings to protect it with great effort. Kandy was the capital of the Sinhalese kings [Calling all Kandyan kings Singhalese is a manipulation of facts. Most of the kings were Tamil Hindus from Nayak Dynasty of Madurai Tamil Nadu, south India. The last king of Kandy, entitled Sri Vickrama Rajasingha(n)1815, whose name is Kannusamy, was one of the Tamil Hindu kings from Madurai].

These Tamil kings made immense contributions to Buddhism and they were the pioneers of Dalada Maligava. Unfortunately, Sri Vicrama Rajasingha(n), for the reason of his non-buddhist Tamil origin, was betrayed to the British by Singhala Buddhist Adigar Ehelopola in 1815. Kings from 1592 to 1815, fortified the terrain of the mountains and made difficult to approach Kandy. The city is a world heritage site declared by UNESCO, in part due to the temple.

Monks of the two chapters of Malwatte and Asgiriya conduct daily ritual worship in the inner chamber of the temple, in annual rotation. They conduct these services three times a day: at dawn, at noon and in the evening.

On Wednesdays there is a symbolic bathing of the Sacred Relic with an herbal preparation made from scented water and flagrant flowers, called Nanumura Mangallaya. This holy water is believed to contain healing powers and is distributed among those present.

The Temple has sustained damage from multiple bombings by terrorists in the past. The first deadly attack was carried out by JVP (Janatha Vimukthy Peramuna), a Singhalese Buddhists terrorist outfit which has now entered into parliamentary politics, split into JVP and NFF, in the late 1980s. On January 25, 1998, Liberation Tigers of Tamil Eelam (LTTE) terrorists carried out a deadly suicide attack inside the temple, killing 8 civilians and leaving 25 others injured, as well as significant damage to the temple structure.But has been fully restored each time.

The worship of corporeal remains of the Buddha, as recorded in the Mahaparinibbana Sutta (the Record of the Demise of the Buddha), was sanctioned by the Buddha himself on the verge of his passing away. The Buddha declared that four noble persons are worthy of their bodily remains being enshrined and honored, the Buddha, the Personal Buddhas (Pacceka Buddhas), the Arahanths (Buddha's disciples) and the Universal Monarchs (Cakkavatti kings). The bodily remains of the Buddha, after their distribution among various states, were enshrined in the funerary mounds known as stupa. However, the four canine Teeth were said to have been separately enshrined and worshipped. The right canine was worshipped in the heavenly domain of the king of gods, Sakra, while another was worshipped by the king of Gandhara in modern Pakistan. The third was taken away by the Nāgas and worshipped in a golden shrine room. The fourth, the left canine was removed from the funerary ashes by a monk and was handed over to the king of Kalinga in Eastern India, as recorded in the Digha Nikaya.

Arrival of the sacred tooth relic

The final attempt made by a neighboring state to make war with Guhasiva for the possession of the Tooth relic caused this venerated relic to leave the Indian shores. By this time, Buddhism was well rooted in Sri Lanka, and the island rulers maintained close relations with the Indian states that fostered Buddhism. For this reason the Kalinga ruler, in imminent danger of losing in battle, decided to send the Tooth relic to the Sri Lankan king whose ascendants were from Kalinga, the present Orissa.

After about eight centuries of its existence in India, the Tooth relic was secretly taken away by Danta and Hemamala, said to be the son-in-law and daughter of Guhasiva. The literary works like Dathavamsa, Daladasirita and the chronicle Mahavamsa, record many and varied vicissitudes that the couple went through en route to Sri Lanka in order to safeguard the relic. It is recorded that the prince and the princess donned the garb of ascetics and carried the Relic hidden within the coiffure of Hemamala not to be noticed by passersby. A twentieth century wall painting of the well known monastery of Kelaniya (about 5 miles east of Colombo), depicts this episode in a classic style executed by a local artist (Solius Mendis).

Danta and Hemamala were said to have embarked on a ship at the ancient port of Tamralipti, a busy port at the time, located at the mouth of the river Ganges, and reached the shores of Sri Lanka at the port of Lankapattana (modern Ilankeiturei) in the Trincomalee District. The Relic was reported to have performed several miracles en route on the ship itself, thus being venerated by human and superhuman beings. The Tooth Relic finally reached the Sri Lankan capital, Anuradhapura, and according to the Sinhala text, Dalada Sirita, the Relic was kept at the Megagiri vihara in the park Mahameghavana.

At the time of its arrival, the Indian ruler Guhasiva's friend, king Mahasena had died and his son, king Kirti Sri Meghavanna (4th century AC), who himself was a pious Buddhist, had succeeded him. The Tooth Relic was well received by the king and placed on the throne itself with much veneration. The chronicle Mahavamsa reports that the king with great faith had the Tooth Relic enshrined in the edifice called Dhammacakkageha originally built by king Devanampiyatissa in the 3rd century BC, within the royal enclosure (Rajavatthu). The king built a special shrine and enshrined the Tooth Relic therein. This shrine has now been identified as the ruined edifice lying almost next to the great refectory known as Mahapali.

There are special religious programs conducted in the Maligawa on every Full Moon Poya day where large numbers participate. Apart from these daily, weekly and monthly ceremonies, there are four major ceremonies held every year. They are Aluth Sahal Mangallaya, Avurudu Mangallaya, Esala Mangallaya, Karthika Mangallaya. Of these, the most important is the Esala Mangallaya.