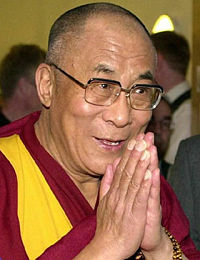 Dalai Lama, meaning ‘Ocean of Wisdom’ is the title given to the spiritual and secular rulers of Tibet since the 15th century. Each Dalai Lama is believed by Tibetans to be reincarnation of his predecessor. All Dalai Lamas are monks of the Gelugpa sect of Tibetan Vajrayana Buddhism and are also believed to be emanations of Avalokiteshvara, the bodhisattva of compassion.

The current Dalai Lama, Tenzin Gyatso, (Geshe, equivalent to Ph.D. in Buddhist Studies) the 14th Dalai Lama of Tibet (1935- ) is the religious, spiritual, and political leader of Tibet, currently in exile, living primarily in McLeod Ganj, India. He was awarded the Noble Peace Prize in 1989 and the U.S. Congressional Gold Medal in 2007.