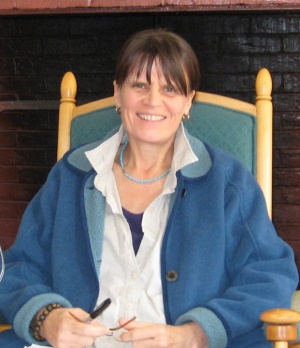 Thanissara, (Mary Weinberg) is from an Anglo-Irish background and started Buddhist practice in the Burmese school in 1975. She was inspired to ordain after meeting Ajahn Chah and spent 12 years as a Buddhist nun, being one of the first women to take ordination in the UK. During her monastic life she became interested in the placement of the feminine within Buddhism and helped found Dhamma retreats for families and children at Amaravati Monastery which later led to the establishment of the Dhamma School in Brighton.

Thanissara has an MA in Buddhist Psychotherapy from Middlesex University & the Karuna Institute, UK and has written a book of poetry, Garden of the Midnight Rosary.

She was one of the first women to be ordained in the West as a nun in Ajahn Chah's Forest tradition, initially as a mae chee (eight precept nun), then as a nun in the siladhara order,based on the ten precept ordination. She left the order after twelve years.

She is director of Dharmagiri Hermitage and Outreach in South Africa and also guides an affiliated HIV/AIDS program. She is also a facilitator for the community Dhamma leader program at Spirit Rock Meditation Center in Woodacre, California.