Difference between revisions of "Thanissaro Bhikkhu" 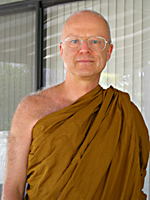 Thanissaro Bhikkhu (Geoffrey DeGraff) (1949 - ) is an American Buddhist monk of the Thai forest kammatthana tradition. After graduating from Oberlin College in 1971 with a degree in European Intellectual History, he traveled to Thailand, where he studied meditation under Ajahn Fuang Jotiko, himself a student of the late Ajahn Lee. Ṭhānissaro Bhikkhu is a notably skilled and prolific translator of the Pāli Canon.[1] He is also the author of many free Dhamma books.