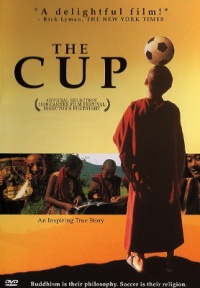 The Cup (Phörpa) is a 1999 comedy film directed by Khyentse Norbu. It is the first feature-length motion picture produced in Bhutan. The plot is about two young football-crazed Tibetan refugees in a remote Himalayan monastery who desperately try to obtain a television for the monastery to watch the 1998 World Cup final.

The Cup was released to DVD on November 13, 2007 in North America by Festival Media (IBFF). The DVD was mastered from a new direct-to-digital transfer from the original film, and includes a bonus documentary entitled Inside The Cup, featuring the director discussing the film, cinema in general and Buddhist philosophy, along with outtakes from the film. There is also a director's commentary audio track.