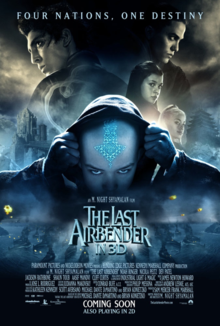 The Last Airbender is a 2010 adventure fantasy film released on July 1, 2010. It is a live-action film adaptation based on the first season of the animated television series Avatar: The Last Airbender. The film stars Noah Ringer as Aang, a reluctant hero who prefers adventure over his job as the Avatar. Aang and his friends, Katara and Sokka, journey to the North Pole to find a Waterbending master to teach Aang and Katara the secrets of the craft. At the same time, Fire Lord Ozai, the current Fire Lord of the Fire Nation, is waging a seemingly endless war against the Earth Kingdom, the Water Tribes, and the already vanquished Air Nomads. The film also stars Nicola Peltz, Jackson Rathbone, and Dev Patel.

The Last Airbender was produced by Paramount Pictures and Nickelodeon Movies. Development for a film began in 2007; it was adapted into a film by M. Night Shyamalan, who also directed and produced. Other producers include Frank Marshall, Kathleen Kennedy, Sam Mercer and Scott Aversano. The series from which it was adapted was influenced by Asian art, mythology and various martial arts fighting styles and was created by Michael Dante DiMartino and Bryan Konietzko. Filming began in mid-March 2009, with locations in Greenland and Pennsylvania.

The Last Airbender was made for $150 million and marketed with a budget of $130 million, making total costs at least $280 million. Premiering in New York City on June 30, 2010, it opened in the United States the following day, grossing an estimated $16 million. The Last Airbender opened at the top of the box office, and eventually grossed $131 million domestically and $318 million worldwide. Critical reception was very negative, criticizing the writing, plot, acting and the low quality of the 3D conversion.