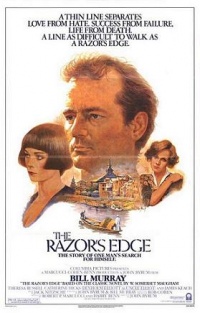 The Razor's Edge is the second film version of W. Somerset Maugham's 1944 novel. The film was released in 1984 and stars Bill Murray, Theresa Russell, Catherine Hicks, Denholm Elliott and James Keach. It was directed by John Byrum.

Larry Darrell returns from the battlefields of World War I to America a different person. His fiance (Isabel) resigns herself to a delay in the wedding plans when Larry heads off to Paris. There he finds he prefers a simpler existence and begins to read. One book inspires him to visit India and on to Nepal where he finds spiritual help from a lama. On returning to Paris he finds Isabel and some old friends. Everyone has changed.