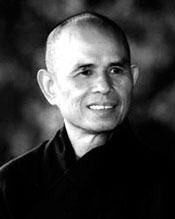 Thich Nhat Hanh (1926-2022) was born in Vietnam and trained in the Zen tradition. He has written over 100 Dharma books and has opened monasteries around the world. He started the Order of Interbeing which has a special emphasis on social engagement work (charities, environmentalism, anti-war). His tradition blends Zen with Theravada mindfulness and western psychology. He was nominated for the Noble Peace Prize by Dr. Martin Luther King, Jr., for his work against wars.

Nhất Hạnh was exiled from Vietnam in the 1960s after expressing opposition to the war. He established dozens of monasteries and practice centers and spent most of his later life at the Plum Village Monastery in southwest France near Thénac, travelling internationally to give retreats and talks. He coined the term "engaged Buddhism" in his book Vietnam: Lotus in a Sea of Fire. After a 39-year exile, he was permitted to visit Vietnam in 2005. In November 2018, he returned to Vietnam to his "root temple", Từ Hiếu Temple, near Huế, where he died on January 22, 2022, at the age of 95.

Nhất Hạnh was active in the peace and deep ecology movements, promoting nonviolent solutions to conflict and raising awareness of the interconnectedness of all elements in nature. He was the founder of the largest monastic order in the West. He was a vegan, refraining from consuming meat or animal products as a means of nonviolence toward animals.

A Pebble for Your Pocket, Full Circle Publishing, 2001

At Home in the World: Stories and Essential Teachings from a Monk's Life, with Jason Deantonis (Illustrator), Parallax Press, 2016

Fear: Essential Wisdom for Getting Through the Storm, HarperOne, 2012

Hermitage Among the Clouds, Parallax Press, 1993

Is nothing something? : Kids' questions and zen answers about life, death, family, friendship, and everything in between, Parallax Press 2014

No Mud, No Lotus: The Art of Transforming Suffering, Parallax Press, 2014

Old Path White Clouds: Walking in the Footsteps of the Buddha, Parallax Press, 1991

Our Appointment with Life: Sutra on Knowing the Better Way to Live Alone, Parallax Press, 1990

Peace Is Every Step: The Path of Mindfulness in Everyday Life, Bantam reissue, 1992

The Art of Communicating, HarperOne, 2013

The Art of Living: Peace and Freedom in the Here and Now, HarperOne, 2017

The Diamond That Cuts Through Illusion, Commentaries on the Prajnaparamita Diamond Sutrs, Parallax Press, 1992

The Heart of the Buddha's Teaching, Broadway Books, 1999

The Heart Of Understanding: Commentaries on the Prajnaparamita Heart Sutra, Full Circle, 1997, (2005 Edition)

The Miracle of Mindfulness, Rider Books, 1991

The Novice: A Story of True Love, HarperCollins, 2011

The Other Shore: A New Translation of the Heart Sutra with Commentaries, Palm Leaves Press, 2017

The Path of Emancipation: Talks from a 21-Day Mindfulness Retreat, Unified Buddhist Church, 2000

The Raft Is Not the Shore: Conversations Toward a Buddhist/Christian Awareness, Daniel Berrigan (Co-author), Orbis Books, 2000

Touching the Earth: Intimate Conversations with the Buddha, Parallax Press, 2004

Transformation and Healing: Sutra on the Four Establishments of Mindfulness, Full Circle, 1997

True Love: A Practice for Awakening the Heart, Shambhala Publications, 1997

Works by or about Thích Nhất Hạnh in libraries (WorldCat catalog)

You Are Here: Discovering the Magic of the Present Moment, Shambhala Publications, 2010

Zen and the Art of Saving the Planet, Harper Collins, 2021