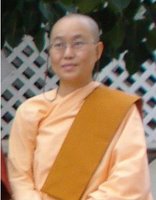 Born nearly five decades ago in Myanmar, Sayalay Thilashin Uttama came to the United States around 30 years ago as a laywomen and wife. In 1988 her interest turned towards spiritual life and meditation and in 1989 she returned to her home country of Myanmar to ordain as an 8-precept thilashin nun.

In 2002, Sayalay Uttama returned to the United States and met Ayya Gunasari in Apple Valley, California.

Over the years, Sayalay Uttama has been continuously dedicated to the practice of Vipassana Meditation as taught in the traditions of Pauk Sayadaw, Dhamma-vijja Ashin Neminda and U San Maung including the Four Foundations of Mindfulness and jhana meditation. She has studied the Pali texts with Ashin U Thitzana and Dr. Ananda Guruge at University of the West (previously known as Hsi Lai University) in Southern California.

In November of 2002, Sayalay Uttama moved together with Ayya Gunasari to Thanti Thitsar Vipassana Meditation Center in Riverside upon its foundation by a mutual friend.

In June of 2007, following Ruth Denison’s offering of the use of Samadhi House at Dhamma Dena Desert Vipassana Center for female monastics, she moved to the Mohave Desert with Venerable Bhikkhunis Ayya Gunasari and Ayya Saccavadi.