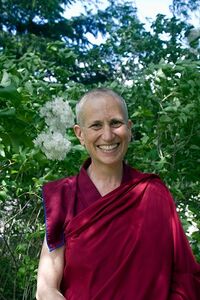 Thubten Chodron, born Cheryl Greene, is an American Tibetan Buddhist nun, author, teacher, and the founder and abbess of Sravasti Abbey, the only Tibetan Buddhist training monastery for Western nuns and monks in the United States. Chodron is a central figure in the reinstatement of the Bhikshuni (tib. Gelongma) ordination of women. She is a student of the 14th Dalai Lama, Tsenzhab Serkong Rinpoche, Lama Thubten Yeshe, Thubten Zopa Rinpoche, and other Tibetan masters. She has published many books on Buddhist philosophy and meditation, and is the only nun who has co-authored a book with the Dalai Lama—Buddhism: One Teacher, Many Traditions.

Born in 1950, Bhikshuni Thubten Chodron grew up in a "non-religious Jewish" family near Los Angeles, California and earned her B.A. in history from University of California at Los Angeles in 1971. After traveling through Europe, North Africa and Asia for one and a half years, she received a teaching credential and went to the University of Southern California to do post-graduate work in education while working as a teacher in the Los Angeles City School System. In 1975, she attended a meditation course given by Lama Thubten Yeshe and Kyabje Thubten Zopa Rinpoche, and subsequently went to Kopan Monastery in Nepal to continue studying Buddhism. In 1977 she was ordained as a Buddhist nun by Kyabje Ling Rinpoche in Dharamshala, and in 1986 she received bhikshuni (full) ordination in Taiwan.

Bhikshuni Thubten Chodron has studied and practiced Buddhism in the Tibetan tradition extensively in India and Nepal under the guidance of the 14th Dalai Lama, Tsenzhab Serkong Rinpoche, Lama Thubten Yeshe, Thubten Zopa Rinpoche and other Tibetan masters and for three years at Dorje Pamo Monastery in France. She directed the spiritual program at Istituto Lama Tzong Khapa in Italy for nearly two years, was resident teacher at Amitabha Buddhist Centre in Singapore,[1] and for 10 years was spiritual director and resident teacher at Dharma Friendship Foundation in Seattle, US.

Emphasizing the practical application of the Buddha’s teachings in our daily lives, Thubten Chodron tries to explain them in ways easily understood and practised by Westerners. She has worked on re-establishing the Bhikshuni lineage of Buddhist nuns, cultivating interfaith dialogue, and Dharma outreach in prisons. Seeing the importance and necessity of a monastery for Westerners training in the Tibetan Buddhist tradition, she founded Sravasti Abbey, a Buddhist monastic community north of Spokane, WA and is the abbess there. It is the only Tibetan Buddhist training monastery for Western monks and nuns in America.

Thubten Chodron is also author or editor of more than 25 books on Buddhism, including two works co-written with the 14th Dalai Lama: Buddhism: One Teacher, Many Traditions and Approaching the Buddhist Path, the first in a multi-volume collection presenting the Dalai Lama’s comprehensive explanation of the Buddhist path. Other popular works include Buddhism for Beginners; Open Heart, Clear Mind; Working with Anger; and Don’t Believe Everything You Think.

Thubten Chodron was a co-organizer of Life as a Western Buddhist Nun, an international conference of Western Buddhist nuns held in 1996. She was a participant in the 1993 and 1994 Western Buddhist teachers conferences with the 14th Dalai Lama, and she was instrumental in the creation of the 2007 International Congress on Buddhist Women's Role in the Sangha. She is a member of the Committee for Bhikshuni Ordination and attends the annual Western Buddhist Monastic Gathering in the USA. Keen on interfaith dialogue, she was present during the Jewish delegation’s visit to Dharamshala in 1990, which was the basis for Rodger Kamenetz’s The Jew in the Lotus, and she attended the Second Gethsemani Encounter in 2002.[6] She has been present at several Mind and Life Institute conferences in which the 14th Dalai Lama dialogues with Western scientists.

Thubten Chodron travels worldwide to teach the Dharma: North America, Latin America, Singapore, Malaysia, India, and the former Soviet countries. Seeing the importance and necessity of a monastery for Westerners training in the Tibetan Buddhist tradition, she founded Sravasti Abbey, a Buddhist monastery in Newport, Washington, USA, in 2003, and became its abbess.

In 2016 she was awarded the Global Bhikkhuni Award, presented by the Chinese Buddhist Bhikkhuni Association of Taiwan.