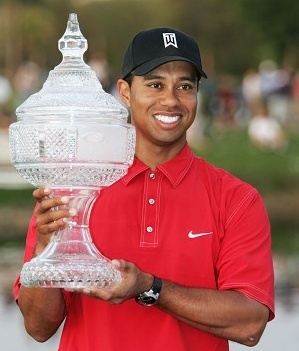 Eldrick Tont "Tiger" Woods (born December 30, 1975) is an American professional golfer whose achievements to date rank him among the most successful golfers of all time. Currently the World No. 1, he was the highest-paid professional athlete in 2007, having earned an estimated $122 million from winnings and endorsements. According to Golf Digest, Woods made $769,440,709 from 1996 to 2007, and the magazine predicts that by 2010, Woods will become the world's first athlete to pass one billion dollars in earnings.

Woods has won fourteen professional major golf championships, the second highest of any male player, and 65 PGA Tour events, third all time. He has more career major wins and career PGA Tour wins than any other active golfer. He is the youngest player to achieve the career Grand Slam, and the youngest and fastest to win 50 tournaments on tour.

Woods has held the number one position in the world rankings for the most consecutive weeks and for the greatest total number of weeks. He has been awarded PGA Player of the Year a record nine times, the Byron Nelson Award for lowest adjusted scoring average a record eight times, and has tied Jack Nicklaus' record of leading the money list in eight different seasons. He has been named Associated Press Male Athlete of the Year a record-tying four times, and is the only person to be named Sports Illustrated's Sportsman of the Year more than once.

Woods, who is multiracial, is credited with prompting a major surge of interest in the game of golf. He dramatically increased attendance and TV ratings and generated interest among a multicultural audience in a game that used to be considered insular and elitist.

After winning the 2008 U.S. Open, Woods is sitting out the rest of the 2008 PGA Tour, missing two major championships and the 2008 Ryder Cup, in order to concentrate on the rehabilitation of his injured left knee.

Woods is a Buddhist. He has said that his faith was acquired from his mother and that it helps control both his stubbornness and impatience.

On February 19, 2010 Tiger Woods delivers a speech to the PGA headquarters in Florida where he apologizes to his family and fans while stating that it is a private matter between him and his family. In the speech at the 10:05 to 10:50 mark, he promises to be a better Buddhist.

"Part of following this path for me is Buddhism, which my mother taught me at a young age," he said. "People probably don’t realize it, but I was raised a Buddhist, and I actively practiced my faith from childhood until I drifted away from it in recent years. Buddhism teaches that a craving for things outside ourselves causes an unhappy and pointless search for security. It teaches me to stop following every impulse and to learn restraint."

On March 25, 2010 just before the famous Master's tournament, Tiger Woods confirmed that he was returning to Buddhism and would be a better Buddhist. He vowed to continually wear a Buddhist blessing bracelet.