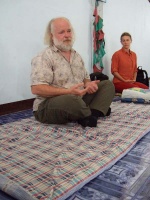 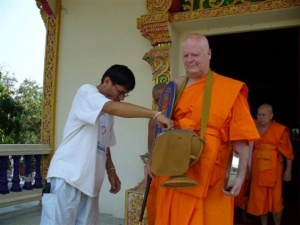 John Timothy O'Malley was born August 14, 1954 in the U.S. He had a medical condition which almost cost him eyesight at an early age, but eventually recovered from this after several medical operations.

He joined the U.S. military at the age of 17 and is a Vietnam era disabled veteran. After the service, for about ten years he hitchhiked throughout all of North America, including Canada and Mexico. Later he enrolled at Evergreen State College in Olympia, Washington. He worked as a cook and a painter. At one time he owned a painting company and hired homeless people to work with him.

He has donated computers to poor families in Mexico and Thailand.

After Hurricane Katrina in 2005 Tim donated his home to a homeless African-American veteran with a large family. He also gave away his motor home and then flew to Thailand to ordain as a Theravada Buddhist monk.

Prior to ordaining, Tim has lived in the woods of Oregon and California as a homeless woodsman living off the land and forest.