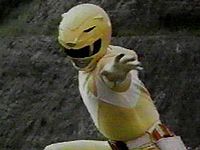 She was played by American actress Audri DuBois in the pre-television pilot as "Trini" (the surname didn't come until the TV series). But when the show was picked up for television, for which two new pilots were filmed, she was played by the late Vietnamese American actress Thuy Trang, who the character was rewritten around (the personalities for all of the original Power Rangers were based on the actor or actress who played them).

Both Thuy Trang and the fictional Trini Kwan were Buddhist.