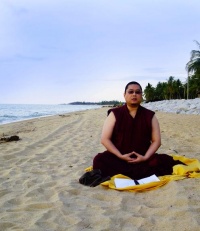 Tsem Tulku Rinpoche (born October 24, 1965) is a tulku, a reincarnate lama of the Gelug school of Tibetan Buddhism, and the founder and spiritual guide of the Kechara House Buddhist Association in Malaysia.

Tsem Tulku is the third in the line of tulkus associated with Ganden Monastery's Shartse college and the Gyuto tantric college. His predecessors were Gedun Nyedrak, a Khampa who served as Ganden Shartse's 72nd abbot; and Kentrul Thubten Lamsang, from Drikung, who died in Phari during the 1950s. Since the former came from a family which owed ties of fealty to Tsem Monastery, which housed a tooth of Tsongkhapa as a holy relic (tsem being the honorific Tibetan word for "tooth"), the name "Tsem" came to be applied to the tulku lineage; hence Tsem Tulku's appellation. ("Rinpoche" is an honorific meaning "precious," which is customarily affixed to the names of lamas.)

Tsem Tulku was born in Taipei, Taiwan to Dewa Nimbo, an Old Torghut Mongolian woman whom Tsem Tulku describes as a "princess" (she was the grand-daughter of Prince Palta, a Xinjiang government official during the Qing and Nationalist periods; and the daughter of Mingyur Wang, briefly a member of the ROC National Assembly); and Lobsang Gyatso, a Tibetan from Ngawa with ties to the Tibetan exile government who, after fleeing to Taiwan, ran a school for Tibetan refugee children. According to Tsem Tulku's website,

"Rinpoche’s father and mother became romantically involved, however, his mother was unaware that his father already had a wife and children in Tibet. Rinpoche’s parents separated even before he was born and the shame of having an illegitimate child was too great for his mother, who gave Rinpoche away immediately after his birth."

The future Tsem Tulku spent his first seven years in Taipei, living under the care of a foster family. His Chinese (and presumably original) name was 葛宜山 (Gě Yíshān).

In 1972 his mother's family arranged for him to be adopted by a Kalmyk family in Howell, New Jersey, where the U.S. government had resettled a number of Kalmyk refugees. His adoptive parents (whom he was led to believe were his birth parents) were Dana and Boris Bugayeff. Tsem Tulku remembers the couple as controlling and abusive, and reports that he attempted several times to commit suicide, and several times to run away from home.

Tsem Tulku recalls having been attracted to Buddhist deities from an early age. He drew amulets featuring them and at one point, imagined "a red lady" (Vajrayogini) with the power to "take us from this world fast!" Despite his adoptive family's disapproval of his involvement in religion, he gravitated towards Rashi Gempil Ling, a nearby Mongolian Buddhist temple where Khensur Lobsang Tarchin resided. He received his first tantric empowerments (into the mantra Om Mani Padme Hum and the "Eight Verses of Mind Transformation") during a 1979 visit of the Dalai Lama.

In 1981, at the age of 16, he ran away from home for the final time after an argument with his father. His website reports:

In Los Angeles, he worked several jobs (including McDonalds and Fotomat); earned a GED while attending Mark Keppel High School in 1983; and lived in Thubten Dargye Ling, a Gelugpa dharma center. For six months he served as a personal assistant to visiting lama Zong Rinpoche, who became his Root Guru. At this time he received the Yamantaka initiation, which he describes as "critical" for other teachings he would later receive. At the same time he attempted to find work as an actor. He was an extra in the 1983 Stephen King / John Carpenter film Christine, and was apparently sought for a role in the 1986 Eddie Murphy vehicle, Golden Child.

Zong Rinpoche urged him to become a monk, come to India, and stay with him at Zong Ladrang (in Ganden Monastery). The future Tsem Tulku promised to do so. Although Zong Rinpoche died soon after, in 1984, he kept his promise, and in 1987 received monastic vows from the Dalai Lama. For the next nine years (1988–1997) he studied at Ganden Shartse (in Mundgod, Karnataka), under Kensur Jampa Yeshe Rinpoche and Lati Rinpoche, while living in a small room in Zong Ladrang. Tsem Tulku remembers this as a time of poor health and financial hardship.

In 1992, on the instructions of his gurus, Tsem Tulku embarked upon a fund-raising tour to Malaysia. The trip was a success, and a number of Malaysian Chinese Buddhists requested his return. Accordingly, Tsem Tulku Rinpoche left India and settled in Kuala Lumpur.

Tsem Tulku is a strong supporter of vegetarianism and animal rescue (or release). (He owns a number of pets, who are often mentioned on his blog.)

Tsem Tulku is the author of Gurus for Hire: Enlightenment for Sale (Kuala Lumpur: Kechara, 2007), which combines autobiography with spiritual commentary. It discusses "the precarious, often tricky Guru-disciple relationship" and "all the political games that are played behind closed temple doors." He also wrote Compassion Conquers All: Teachings on the Eight Verses of Mind Transformation (Kechara, 2007), a textual commentary.

Several books have been compiled from Tsem Tulku's teachings. These include Why I Make Myself Unhappy (Kechara, 2005), Faces of Enlightenment (Kechara, 2006), and Peace: A Compilation of Short Teachings (Kechara, 2009). If Not Now, When? (Kechara, 2008) is a coffee-table book of quotations.

Several of Tsem Tulku's disciples have published spiritual memoirs. These include Jamie Khoo's Call Me Paris (Kechara, 2010) and David Lai's There's No Way But Up (Kechara, 2010).