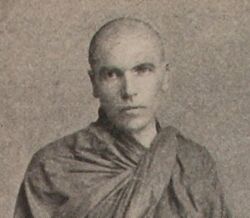 U Dhammaloka (Burmese: ဦးဓမ္မလောက; c. 1856 – c. 1914) was an Irish-born migrant worker turned Buddhist monk, critic of Christian missionaries, and temperance campaigner who took an active role in the Asian Buddhist revival around the turn of the twentieth century.

Dhammaloka was ordained in Burma prior to 1900, making him one of the earliest attested western Buddhist monks in modern times. He was a celebrity preacher, vigorous polemicist and prolific editor in Burma and Singapore between 1900 and his conviction for sedition and appeal in 1910–1911. Drawing on western atheist writings, he publicly challenged the role of Christian missionaries and by implication the British empire.

Dhammaloka's early life and given name are as yet uncertain. He reportedly gave at least three names for himself – Laurence Carroll, Laurence O'Rourke and William Colvin. On occasion he used the nom de plume "Captain Daylight". It is accepted that he was Irish, almost certainly born in Dublin in the 1850s, and emigrated to the United States, possibly via Liverpool. He then worked his way across the US as a migrant worker before finding work on a trans-Pacific liner. Leaving the ship in Japan, he made his way to Rangoon, arriving probably in the late 1870s or early 1880s, before the final conquest of Upper Burma by the British.

In Burma, he found work in Rangoon as a tally clerk in a logging firm before becoming interested in the Burmese Buddhism he saw practised all around him. Around 1884, he took ordination as a novice monk under the name Dhammaloka. Fully ordained sometime prior to 1899, he began work as a teacher (probably in the Tavoy monastery in Rangoon). By 1900, he had gained the status of a senior monk in that monastery and began travelling and preaching throughout Burma, becoming known as the "Irish pongyi" or "Irish Buddhist". Mounted soldiers disembark surrounded by Burmese onlookers. British forces enter Mandalay in 1885 marking the final conquest of Burma.

In 1900, Dhammaloka began his public career with two largely unnoticed advertisements forbidding Christian missionaries to distribute tracts and a more dramatic – and widely reprinted – declaration, first published in Akyab, warning Buddhists of the threats Christian missionaries posed to their religion and culture. Following a 1901 preaching tour, he confronted an off-duty British Indian police officer at the Shwedagon pagoda in Rangoon in 1902 over the wearing of shoes – a contentious issue in Burma as Burmese Buddhists would not wear shoes on pagoda grounds. The Indians who staffed the police force equally went barefoot in Indian religious buildings, but off-duty visited Burmese pagodas in boots, in what was interpreted as a mark of serious disrespect. Attempts by the officer and the British authorities to bring sedition charges against Dhammaloka and to get pagoda authorities to repudiate him failed, boosting his public reputation. Later that year he held another preaching tour, which drew huge crowds.

After some years' absence Dhammaloka returned to Burma in 1907, establishing the Buddhist Tract Society (see below). In December a reception in his honour was held in Mandalay with hundreds of monks and he met the new Thathanabaing, the government recognised head of the sangha; in early 1908 he held another preaching tour, and continued preaching until at least 1910 and his trial for sedition (see below).

Dhammaloka produced a large amount of published material, some of which, as was common for the day, consisted of reprints or edited versions of writing by other authors, mostly western atheists or freethinkers, some of whom returned the favour in kind. In the early 1900s Dhammaloka published and reprinted a number of individual tracts attacking Christian missionaries or outlining Buddhist ideas.

In 1907 he founded the Buddhist Tract Society in Rangoon, which produced a large number of tracts of this nature. It was originally intended to produce ten thousand copies of each of a hundred tracts; while it is not clear if it reached this number of titles, print runs were very large. To date copies or indications have been found of at least nine different titles, including Thomas Paine's Rights of Man and Age of Reason, Sophia Egoroff's Buddhism: the highest religion, George W Brown’s The teachings of Jesus not adapted to modern civilisation, William E Coleman’s The Bible God disproved by nature, and a summary of Robert Blatchford.

Beyond this, Dhammaloka was an active newspaper correspondent, producing a large number of reports of his own activities for journals in Burma and Singapore (sometimes pseudonymously; Turner 2010: 155) and exchanging letters with atheist journals in America and Britain. He was also a frequent topic of comment by the local press in South and Southeast Asia, by missionary and atheist authors, and by travel writers such as Harry Franck (1910).