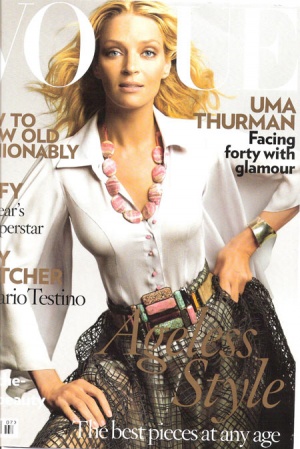 Uma Thurman (pronounced /ˈuːmə ˈθɜrmən/; born April 29, 1970), is an American actress. She performs predominantly in leading roles in a variety of films, ranging from romantic comedies and dramas to science fiction and action thrillers. She is best known for her work under the direction of Quentin Tarantino. Her most popular films include Dangerous Liaisons (1988), Pulp Fiction (1994), Gattaca (1997) and Kill Bill (2003–04).

Thurman's father, Robert, a scholar and professor at Columbia University of Indo-Tibetan Buddhist studies, was the first westerner to be ordained as a Tibetan Buddhist monk. He gave his children a Buddhist upbringing: Uma is named after an Dbuma Chenpo (in Tibetan, the "db" is silent; from Mahamadhyamaka in Sanskrit, meaning "Great Middle Way"). She has three brothers, Ganden (b. 1971), Dechen (b. 1973) and Mipam (b. 1978), and a half-sister named Taya (b. 1960) from her father's previous marriage. She and her siblings spent time in Almora, India, during childhood, and the Dalai Lama sometimes visited their home.

Thurman grew up mostly in Amherst, Massachusetts and Woodstock, New York. She is described as having been an awkward and introverted girl who was teased for her tall frame, angular bone structure, unusual name (sometimes using the name “Uma Karen” instead of her birth name) and size 11 feet. When she was 10 years old, a friend's mother suggested a nose job.

As a child, she suffered bouts of body dysmorphic disorder, which she discussed in an interview with Talk magazine in 2001.

Thurman attended Northfield Mount Hermon, a college preparatory boarding school in Northfield, Massachusetts, where she earned average grades, but excelled in acting. Talent scouts noticed her performance as Abigail in a production of The Crucible, and offered her the chance to act professionally. Thurman moved to New York City to pursue acting and to attend the Professional Children's School, but she dropped out before graduating.