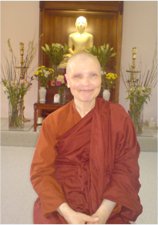 Venerable Sucinta, senior bhikkhuni at Sanghamittārāma (Buddhist monastery in Australia), came to Australia at the invitation of the Buddhist Society of Victoria.

Venerable Sucinta was born in Germany. She began monastic life at Amaravati Buddhist Monastery in England in 1991. She continued her training and practice under guidance of Venerable Henepola Gunaratana at the Bhavana Society in West Virginia, USA.

In 1998 she received bhikkhuni ordination in Bodh Gaya, India, after which she spent several years meditating and studying in Myanmar.

Further spiritual guidance for the Sanghamittārāma project is provided by Ajahn Brahmavamso, Abbot of Bodhinyana Monastery in Perth.