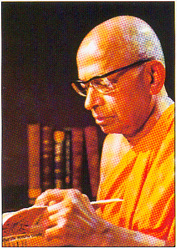 The venerable Prof Walpola Sri Rahula Maha Thera, Ph.D. (1907-1997) was a Buddhist monk, scholar and writer. He is considered to be one of the top Sri Lankan intellectuals of the 20th century. In 1964, he became the Professor of History and Religions at Northwestern University, thus becoming the first bhikkhu to hold a professorial chair in the Western world. He also once held the position of Vice-Chancellor at the then Vidyodaya University (currently known as the University of Sri Jayewardenepura). He has written extensively about Buddhism in English, French and Sinhalese. His book, What The Buddha Taught, is considered by many to be one of the best books written about Theravada Buddhism.

He was born in 1907 at Walpola, a tiny village in southern Sri Lanka. At thirteen, he entered the Sangha. His education covered Sinhala, Pali, Sanskrit, Buddhism, history and philosophy. He studied at the Vidyalankara Pirivena and at the University of Ceylon, where he associated with E. F. C. Ludowvk, G. P. Malalasekera, E. W. Adikaram and other luminaries. After his period at the Sorbonne, he became Vice-Chancellor of Vidyodaya University. He was noted not only for his erudition but also for his strong socialist views, as well as his belief that monks have a duty to play a role in guiding the political consciousness of the people. His book Bhikshuvakage Urumaya (Heritage of the Bhikkhu) was a strong voice in the Buddhist Nationalist movement that led to the 1956 electoral victory of Solomon Dias Bandaranaike. He left Vidyodaya University in 1969, due to political differences with the government of the day. Thereafter, he returned to the West and worked in many academic institutions in Europe. He returned to Sri Lanka during his last days, and lived in the temple near the New Parliament in Kotte, until his passing away.

Dr. Rahula attended Ceylon university (now known as the University of Colombo). He obtained a B.A. Honours degree (London), and then earned a Doctorate of Philosophy, having written a thesis on the History of Buddhism in Sri Lanka (Ceylon). Then he went on to study Indian Philosophy at Calcutta University and later studied Mahayana at the Sorbonne. It was during his time at the Sorbonne in the late 1950s that he produced What the Buddha Taught, a highly regarded introductory text on Buddhism, for which he is best known.

Dr. Rahula is the first Buddhist monk to become a professor in a Western University. When he became Professor of History and Literature of Religions there were no Theravada Temples in the United States. He later became a Professor Emeritus at the same University. Dr. Rahula also held positions at several other American Universities. He was a visiting lecturer at Swarthmore College and Regents Lecturer at UCLA. He became Vice-Chancellor of Vidyoda University (now Sri Jayawardhanapura University) in 1964. He was later instrumental in encouraging the formation of the first Theravada temple in the United States, the Washington Vihara.

Dr. Rahula was awarded several titles during his lifetime. The highest honorary title, Tripitakavagisvaracarya (Supreme Master of Buddhist Scriptures), was given him by Sri Kalyapi Samagri Sangha-sabha (the Chapter of the Sangha in Sri Lanka) in 1965, with the qualification Sri (Gracious), a title held by only two or three scholars in Sri Lanka. He was also awarded the title "Aggamaha Panditha" from Burma.

Dr. Rahula has written extensively about Theravada Buddhism. Apart from his world-renowned book What the Buddha Taught, he published an enormous number of papers on Buddhism. Notable books written by him include, History of Buddhism in Ceylon, Heritage of the Bhikkhu, Zen and the taming of the Bull and Le Compendium de la Super Doctrine (French).