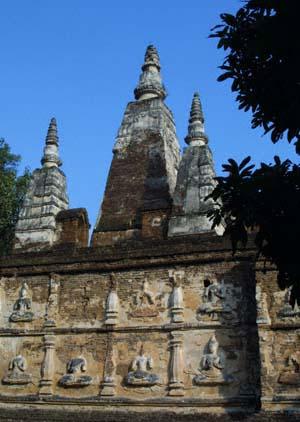 Beneath the seven spires is a cave containing a Lanna-style Buddha image, sculpted in the mid-15th century. Around the base of the chedi are 70 smiling heavenly beings adorned in luxurious clothes and fine jewelry. The extraordinary proportions, the angelic, levitating figures carved into the base of the chedi, and the juxtaposition of the other buildings make Wat Chet Yot a masterpiece.

A door inside the niche containing the Buddha leads to the roof on which rests the Phra Kaen Chan (Sandalwood Buddha).