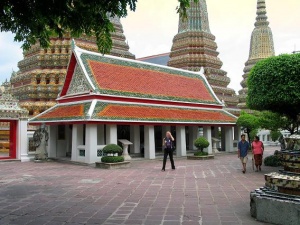 Prior to the temple's founding, the site was a centre of education for traditional Thai medicine, and statues were created showing yoga positions.

During the Rama III restoration, plaques inscribed with medical texts were placed around the temple. These received recognition in the Memory of the World Programme on 21 February 2008, according to Thailand's Government Public Relations Department. The temple was created as a restoration of an earlier temple on the same site, Wat Phodharam, with the work beginning in 1788. The temple was restored and extended in the reign of King Rama III, and was restored again in 1982. In 1962 a school for traditional medicine and massage was established.

Wat Pho is the one of the largest and oldest wat in Bangkok (with an area of 50 rai, 80,000 square metres), and is home to more than one thousand Buddha images, as well as one of the largest single Buddha images: the Reclining Buddha (Phra Buddhasaiyas, Thai พระพุทธไสยาสน์). Made as part of Rama III's restoration, the Reclining Buddha is 46 meters long and 15 meters high, decorated with gold plating on his body and mother of pearl on his eyes and the soles of his feet. The latter display 108 auspicious scenes in Chinese and Indian styles.