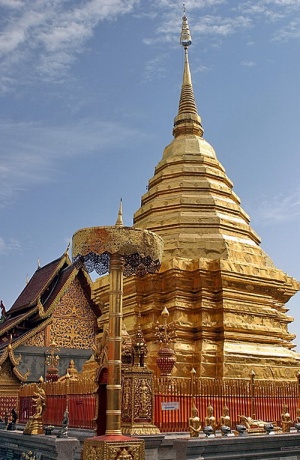 Wat Phrathat Doi Suthep (Thai: วัดพระธาตุดอยสุเทพ) is a Theravada Buddhist temple in Chiang Mai Province, Thailand. The temple is often referred to as Doi Suthep although this is actually the name of the mountain it is located on. The temple is located 15 km from the city of Chiang Mai and is a sacred site to many Thai people. From the temple impressive views of Chiang Mai can be seen and it remains a popular destination of foreign visitors.

The original founding of the temple remains a legend and there are a few varied versions. The temple is said to be founded in 1383 when the first chedi was built . Over time the temple has expanded, and been made to look more extravagant with many more holy shrines added. A road to the temple was first built in 1935.

According to legend, a monk named Sumanathera from Sukhothai had a dream; in this dream a god told him to go to Pang Cha and look for a relic. Sumanathera ventured to Pang Cha and is said to have found a bone, which many claim was Buddha's shoulder bone. The relic displayed magical powers; it glowed, it was able to vanish, it could move itself and replicate itself. Sumanathera took the relic to King Dharmmaraja who ruled the Sukhothai.

The eager Dharmmaraja made offerings and hosted a ceremony when Sumanathera arrived. However the relic displayed no abnormal characteristics, and the king, doubtful of the relic's authenticity, told Sumanathera to keep it.

However, King Nu Naone of the Lanna Kingdom heard of the relic and offered the monk to take it to him instead. In 1368 with Dharmmaraja's permission, Sumanathera took the relic to what is now Lamphun, in northern Thailand. The relic apparently split in two, one piece was the same size, the other was smaller than the original. The smaller piece of the relic was enshrined at a temple in Suandok. The other piece was placed by the King on the back of a white elephant which was released in the jungle. The elephant is said to have climbed up Doi Suthep, at the time called Doi Aoy Chang (Sugar Elephant Mountain), trumpeted three times before dying at the site. It was interpreted as a sign and King Nu Naone ordered the construction of a temple at the site.

The wat can be reached by road from Chiang Mai. From the car park, at the temple base visitors can climb 309 steps to reach the pagodas or there is a tram. Entry to the temple costs 30 Thai baht for foreigners (or 50 baht if you would like a two-way tram ticket included) and is free for Thai nationals.

Once inside the temple grounds; visitors must take off their shoes. Visitors must be appropriately dressed. The original copper plated chedi is the most holy area of the temple grounds. Within the site are pagodas, statues, bells and shrines. Aspects of the Wat draw from both Buddhism and Hinduism. There is a model of the Emerald Buddha and a statue of the Hindu God Ganesh. Views of Chiang Mai can be seen on the other side of the temple.