What the Bleep Do We Know!? 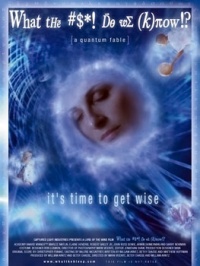 What the Bleep Do We Know!? (also written What tнe #$*! Dө ωΣ (k)πow!? and What the #$*! Do We Know!?) is a 2004 film which combines documentary-style interviews, computer-animated graphics, and a narrative that posits a spiritual connection between quantum physics and consciousness. The plot follows the story of a deaf female photographer; as she encounters emotional and existential obstacles in her life, she comes to consider the idea that individual and group consciousness can influence the material world. Her experiences are offered by the filmmakers as an illustration of the movie's thesis about quantum physics and consciousness. The 2004 cinematic release of the film was followed by a substantially changed, extended DVD version in 2006.

Bleep was conceived and its production funded by William Arntz, who co-directed the film along with Betsy Chasse and Mark Vicente: all of these individuals are students of Ramtha's School of Enlightenment. A moderately low-budget independent production, it was promoted using viral marketing methods and opened in art-house theaters in the western United States, winning several independent film awards before being picked up by a major distributor and eventually grossing over $10 million.

Filmed in Portland, Oregon, What the Bleep Do We Know blends a fictional story line, documentary-style discussion, and computer animation to present a viewpoint of the physical universe and human life within it, with connections to neuroscience and quantum physics. Some ideas discussed in the film are:

In the narrative segments of the movie, Marlee Matlin portrays Amanda, a deaf photographer who acts as the viewer's avatar as she experiences her life from startlingly new and different perspectives.

In the documentary segments of the film, interviewees discuss the roots and meaning of Amanda's experiences. The comments focus primarily on a single theme: We create our own reality. The director, William Arntz, has described What the Bleep as a movie for the "metaphysical left".

A sequel was made titled, What the Bleep Do We Know!?: Down the Rabbit Hole in 2006 and included material from the original.