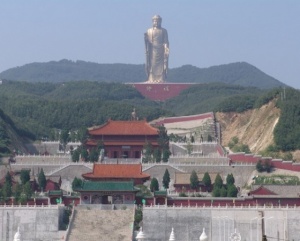 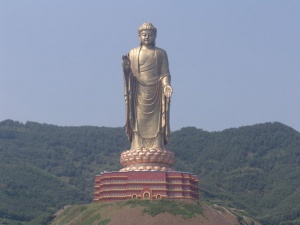 The Spring Temple Buddha (simplified Chinese: 鲁山大佛; traditional Chinese: 魯山大佛; pinyin: Lǔshān Dàfó) is a statue depicting Vairocana Buddha located in the Zhaocun township of Lushan County, Henan, China. It is placed within the Fodushan Scenic Area, close to National Freeway no. 311. The statue was completed in 2002.

Plans for its construction were announced soon after construction had begun on the Maitreya Project by Indian and British planners in Bihar, Northern India, which set out to be the world's largest statue itself.

The project as a whole was estimated to cost around $55m, $18m of which being spent on the statue. It was originally estimated to consist of 1,100 pieces of copper cast, with a total weight of 1,000 tonnes. Plans of the construction of the Spring Temple Buddha were announced soon after the blowing up of the Bamiyan Buddhas by the Taliban in Afghanistan. China has condemned the systematic destruction of the Buddhist heritage of Afghanistan.

The Spring Temple Buddha derives its name from the nearby Tianrui hot spring, which spews water at 60 °C and is renowned in the area for its curative properties. The Foquan Temple, built during the Tang dynasty, houses the "Bell of Good Luck", placed on top of Dragon Head peak. This bronze bell weighs 116 tons.