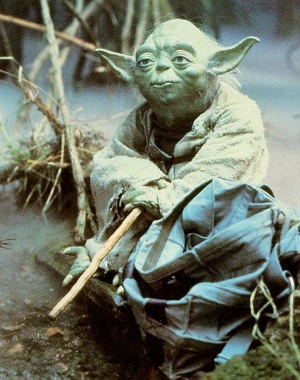 Yoda is a character and a protagonist in the Star Wars universe, who appears in all of the six films of the two trilogies. Yoda dies in Star Wars Episode VI: Return of the Jedi, when he is 900 years old. Although not specifically defined as a Buddhist, the teachings, actions, and style of this character place him similar to a Zen master or Samurai knight. 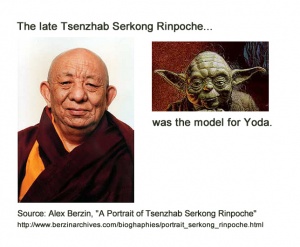 The image basis for Yoda was created from the debate partner of the Dalai Lama, the Rinpoche Tsenzhab Sekong.

The Jedi Order of celibate knights base their lives on such things as mindfulness, serenity, and the mysterious “Force”. Not unlike the celibate forest monks of Thailand, if one replaces the “Force” with the Dhamma. There are also the obvious similarities to the Samurai who vehemently adopted Zen.

"You must unlearn what you have learned."

“Nothing more will I teach you today. Clear your mind of questions.” (Similar to the preparation for meditation, clearing the mind to focus on the breath, sensations, etc.)

At one point Luke enters a cave for meditation to confront his demons and then states:

Luke Skywalker: “What’s in there?”

Yoda: “Only what you take with you.”

Luke Skywalker: “But how am I to know the good side from the bad?”

Yoda: "You will know. When you are calm, at peace. Passive.”

And one of the best quotes by Yoda:

“Try not! Do, or do not. There is no try.” (Similar to the Zen concept of succeeding or feeling as if you will face death used in sports, etc.)

The name itself, Yoda is very similar to the Pali word Yodha and is pronounced the same. Yodha means 'soldier' and the character in the movie was a sort of Samurai master (Jedi) as well as a philosopher and teacher.